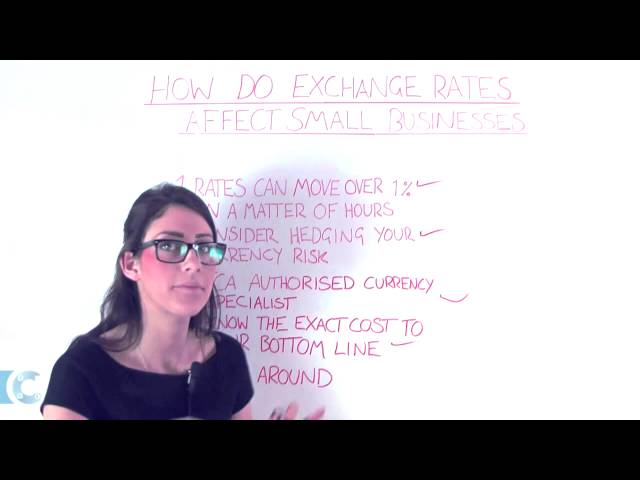 How Do Changes in Currency Exchange Rates Affect International Business?

Currency exchange rates can have a significant impact on international business. A change in the value of a currency can render products and services too expensive or too cheap for foreign markets, making it difficult to do business abroad. For example, if the value of the US dollar were to increase against the euro, then European customers would find US products and services more expensive, and American businesses would find it more difficult to sell their goods and services in Europe.
A change in currency exchange rates can also impact the cost of raw materials and other inputs used in production. For example, if the value of the US dollar decreases against the Canadian dollar, then American businesses would find Canadian inputs cheaper, and vice versa. This can make it more or less advantageous to source inputs from different countries.
Changes in currency exchange rates can also make it more or less attractive to invest in different countries. For example, if the value of the US dollar increases against the Japanese yen, then US investments in Japan will become more valuable, and Japanese investors will find it more attractive to invest in America.
In general, currency exchange rate fluctuations can create both risks and opportunities for international businesses. It is important for businesses to monitor changes in currency values so that they can adjust their prices, sourcing decisions, and investment strategies accordingly.

The Impact of Currency Fluctuations on International Business

Currency exchange rates can have a significant impact on international business. When exchange rates fluctuate, it can lead to changes in the costs of goods and services, which can in turn affects the bottom line for businesses.
There are a number of factors that can influence currency exchange rates, including political stability, economic indicators, and central bank policies. Businesses need to be aware of these factors in order to minimize the risks associated with currency fluctuations.
One way to hedge against currency risk is to enter into forward contracts. These contracts allow businesses to lock in an exchange rate for a future transaction. This can help businesses budget and plan for expenses, and avoid being caught off-guard by sudden changes in the market.

The Benefits of a Stable Currency for International Business

How Do I Accept Credit Cards for My Small Business?

How to Minimize the Impact of Currency Fluctuations on International Business

Currency fluctuations are a normal part of doing business internationally, and companies must take them into account when planning their activities. While it is not possible to completely eliminate the risk posed by these fluctuations, there are steps that companies can take to minimize their impact.
One way to hedge against currency risk is to use forward contracts. These contracts allow companies to lock in a specific exchange rate for a future transaction, thus ensuring that they will not be affected by any changes in the intervening period. Companies can also use currency options to protect themselves against unfavorable movements in exchange rates.
Another way to reduce currency risk is to invoiced customers in their own local currency. This way, even if the value of the currency fluctuates, the company will still receive the same amount of money. Finally, companies can also choose to locate their production facilities or other key operations in countries whose currencies are relatively stable.
While no company can completely eliminate currency risk, by taking steps such as these, businesses can minimize its impact and protect themselves from potentially harmful fluctuations.

The Risks of Operating a Business in a Foreign Country

The risks of operating a business in a foreign country are many and varied. One of the most significant risks is the fluctuation of currency exchange rates. A sudden change in the value of a country’s currency can have a devastating effect on a company’s bottom line.
For example, imagine that you are an American company that exports goods to Japan. You have priced your goods in yen, and you have budgeted for a certain amount of yen to be paid into your bank account each month. However, due to a sudden drop in the value of the yen, the amount of yen you receive each month is less than you had budgeted for. This can put a strain on your cash flow and affect your ability to meet your financial obligations.
A change in currency exchange rates can also affect the price of goods and services that you import from another country. If the value of the currency you are importing from goes up, then the cost of your imports will also go up. This can eat into your profits and make it more difficult to compete in the marketplace.
Changes in currency exchange rates can also impact your customers and their willingness to purchase your goods or services. If the value of their currency goes down, they may be less likely to buy from you because their purchasing power has decreased. Conversely, if the value of their currency goes up, they may be more likely to buy from you because their purchasing power has increased.
The bottom line is that changes in currency exchange rates can have a significant impact on international business transactions. When conducting business in a foreign country, it is important to be aware of the risks associated with fluctuations in exchange rates.

How Can Affiliate Marketing Help My Business?

How to Manage Currency Risk in International Business

Currency risk is the risk that changes in currency exchange rates will adversely affect the value of international investments. For businesses that operate in multiple countries, currency risk can have a significant impact on the bottom line.
There are a number of ways to manage currency risk, including hedging, diversification, and using alternatives to traditional foreign currency denominated finance.
Hedging is a way to protect against loss by entering into offsetting contracts. For example, a company that exports goods to another country may enter into a forward contract to sell its goods at a fixed price in the future, regardless of what happens to the exchange rate.
Diversification is another way to manage currency risk. By investing in a variety of assets denominated in different currencies, investors can limit their exposure to any one particular currency.
Finally, businesses can use alternatives to traditional foreign currency financing arrangements, such as cross-border trade financing and local currency financing. These alternatives can help companies minimize their exposure to currency risk.

The Impact of Currency Devaluation on International Business

How to Protect Your Business from Currency Devaluation

In recent years, we have seen a number of currencies around the world experience sharp devaluations. This can have a big impact on businesses that operate internationally, as it can make their products and services much more expensive for foreign buyers.
There are a few ways that companies can protect themselves from currency devaluation:
1. Diversify your customer base: Don’t put all your eggs in one basket by relying too heavily on exports to any one country. Try to diversify your customer base so that you are selling to many different countries. This will help to offset the impact of any one currency devaluing.
2. Use hedging strategies: There are a number of financial hedging strategies that companies can use to protect themselves from currency fluctuations. These can be complex, so it’s important to seek professional advice before entering into any hedging contracts.
3. Price your products and services in multiple currencies: If you have customers in different countries, consider pricing your products and services in those countries’ currencies. This will help to insulate you from the impact of currency swings.
4. Hold some cash in foreign currencies: Another way to protect yourself from currency swings is to hold some cash in foreign currencies. This way, if the value of the dollar falls relative to other currencies, your foreign cash holdings will increase in value.
5. Use invoicing and payment methods that minimize currency risk: There are a number of invoicing and payment methods that can help to minimizecurrency risk when doing business internationally. Again, it’s important to seek professional advice before choosing a particular method.

The Advantages of a Strong Currency for International Business

The Disadvantages of a Weak Currency for International Business

When a country’s currency is weaker than other currencies, it can have a number of disadvantages for businesses that operate internationally. First, it can make imported goods more expensive, which can lead to reduced demand and lower sales. Second, it can make it more expensive for businesses to borrow money in foreign currencies, which can increase the cost of doing business. Finally, a weak currency can make a country’s exports less competitive in global markets, leading to lower sales and decreased profits.