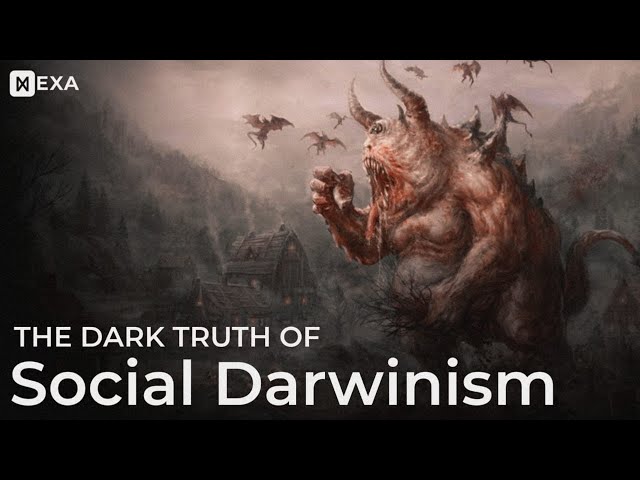 Social Darwinism is a theory that was popular in the late 19th century. It holds that the strongest and fittest individuals in a society will survive and thrive, while the weakest will perish.

What is social Darwinism?

Social Darwinism is the belief that individuals, groups, and species compete in a struggle for existence in which only the fittest survive. The theory was popularized by British philosopher Herbert Spencer in the 19th century and came to be used by politicians and businessmen as a justification for laissez-faire capitalism and imperialism.

The history of social Darwinism.

Social Darwinism is a theory that was popular in the late 19th and early 20th centuries. It argues that the strongest and most fit individuals in society will prosper, while the weakest will languish. This theory was used to justify laissez-faire capitalism, which is the idea that businesses should be allowed to operate without government interference.
Social Darwinism had a profound impact on the government’s relationship to big business. Many political leaders believed that businesses should be allowed to grow and compete without interference from the government. This hands-off approach to business led to a period of great economic growth in the United States, but it also led to some negative consequences. One negative consequence was the rise of monopolies, which are businesses that control an entire industry. Monopolies often stifle competition and prevent consumers from getting the best possible price for goods and services.
The history of social Darwinism is complex, and its legacy is still being debated by scholars today. However, there’s no doubt that this theory had a major impact on the way that governments around the world relate to big business.

How social Darwinism has been used to justify inequality.

The theory of social Darwinism was used in the late 19th and early 20th centuries to justify the inequality of people in a capitalist society. The theory was used to explain how some people were rich and some were poor, and how this was natural and inevitable. The theory was also used to justify the policies of laissez-faire capitalism, which said that the government should not intervene in the economy.
Social Darwinism is no longer a scientific theory, but it still has a powerful impact on our society. The idea that some people are naturally inferior to others is still used to justify discrimination and inequality.

Business Ideas What to Sell?

The problem with social Darwinism.

Social Darwinism is the theory that individuals, groups, and even species compete with each other for survival and that the strongest will win out while the weaker ones will die off. This idea was popularized in the late 1800s by British scientist Charles Darwin and his theory of evolution by natural selection.
While Darwin’s theory was originally intended to explain the natural world, it was quickly co-opted by social theorists who used it to justify their belief that human societies functioned in the same way. They argued that government should not interfere with business or industry because this would only hinder the natural progress of society.
This theory had a profound effect on government policy in the late 19th and early 20th centuries. For example, it was used to justify laissez-faire capitalism, a hands-off approach to business and industry that LET them regulate themselves. This philosophy led to widespread corruption and cronyism, as businesses took advantage of their lack of regulation.
Social Darwinism also justified Imperialism, the practice of one country conquering and controlling another, often for economic gain. Imperialist countries justified their actions by claiming they were helping to spread civilization to less developed parts of the world. In reality, they were often motivated by a desire for cheap labor and natural resources.
The problem with social Darwinism is that it is based on a false assumption: that humans are no different from animals in the way they compete for survival. We are not governed by instinct like animals; we have reason and free will. This means we can choose to cooperate with each other instead of compete, and we can work together to create a fairer, more just society.

In the late 1800s, a new scientific theory known as social Darwinism began to gain popularity. This theory suggested that human populations functioned like animal populations, and that the fittest individuals would always rise to the top while the weakest would be left behind.
Social Darwinism became very popular among businessmen and politicians, who used it to justify their belief that government should stay out of the economy and allow businesses to compete freely. They believed that this competition would weed out the weak businesses and make the remaining businesses stronger.
In addition, social Darwinism was used to justify laissez-faire policies which limited government regulation of business. Politicians believed that if the government interfered too much in business, it would stifle competition and prevent businesses from reaching their full potential.
The impact of social Darwinism on government policy was significant. It led to a shift in thinking about the role of government, and helped to legitimize many of the laissez-faire policies which were enacted in the late 1800s.

How Do I Accept Credit Cards for My Business?

The role of social Darwinism in the development of capitalism.

The theory of social Darwinism played a significant role in the development of capitalism. The idea that the strong should survive and the weak should perish was used to justify the concentration of wealth and power in the hands of a few. The ruthless competition of capitalism was seen as a natural extension of this principle. Social Darwinism also provided a justification for laissez-faire policies, which favored businesses and allowed them to operate without government interference.
Critics of social Darwinism argue that it condones exploitation and promotes an unjust social order. Supporters argue that it is simply a recognition of reality, and that any attempts to change the system will only lead to more suffering.

The connection between social Darwinism and eugenics.

Social Darwinism is the belief that the strong will survive and thrive while the weak will perish. This theory was used to justify laissez faire capitalism, which is the idea that businesses should be allowed to operate without government interference.
Eugenics is the science of improvement of the human race by controlled breeding. Eugenicists believe that it is possible to breed better human beings by allowing only the fittest to reproduce.
Social Darwinism and eugenics were both used to rationalize government inaction in the face of social problems. Social Darwinists believed that it was not the government’s role to help those who were not doing well, because they would simply be replaced by those who were stronger. Eugenicists believed that it was not the government’s role to help those with genetic defects, because they would simply pass those defects on to their children.
Both of these beliefs led to a hands-off approach by the government when it came to issues like poverty, disease, and labor rights. Big business took advantage of this situation, and workers were often treated poorly, with no protection from dangerous or unhealthy working conditions.

The influence of social Darwinism on Nazi ideology.

Social Darwinism is the theory that individuals, groups, and species compete in a struggle for survival in which the fittest ones succeed while the weaker ones fail and perish. The term “social Darwinism” was coined by British sociologist Herbert Spencer in the 1870s, but the idea of survival of the fittest had been around long before then.
Social Darwinism was popularized in the United States by writer and businessman Andrew Carnegie, who used it to justify his belief that wealthy people were “the best” and deserved to rule society. Carnegie’s ideas were later adopted by German chancellor Otto von Bismarck, who used them to justify his country’s imperialist expansion in Africa and Asia.
In the 1930s, social Darwinism was used to justify Nazi Germany’s policies of racial segregation, anti-Semitism, and eugenics. Nazi ideologues such as Alfred Rosenberg believed that Germany was locked in a struggle for survival with inferior races such as Jews and Slavs, and that it was necessary to exterminate these races in order to preserve the purity of the German nation. Rosenberg’s ideas were later echoed by Adolf Hitler, who used them to justify his genocidal policies during World War II.

How Blogging Can Help Your Business?

The legacy of social Darwinism.

The theory of social Darwinism had a profound effect on the relationship between governments and big business. The theory posited that humans were engaged in a constant struggle for survival, and that the fittest would ultimately prevail. This theory was used to justify the actions of big business, which was seen as ruthlessly pursuing its own interests. Governments were seen as powerless to interfere in this process, and many laissez-faire policies were implemented as a result.
The theory of social Darwinism began to lose its hold on public opinion after World War I, when it became clear that business was not always acting in the interests of the wider community. New Deal policies in the United States sought to redress the balance between business and government, and social Darwinism became increasingly unpopular. It is now widely discredited, but its legacy continues to influence government-business relations.

The theory of social Darwinism has its roots in the ideas of Herbert Spencer, an English philosopher who believed that societies evolve through a process of “survival of the fittest.” This theory was adapted by some social scientists in the late 19th century as a way to explain economic inequality.
Social Darwinism is sometimes used to justify policies that favor the wealthy and powerful. For example, some people have used it to argue that government assistance for the poor is unnecessary, because only the fittest deserve to survive.
Social Darwinism also influenced early 20th-century business leaders, who believed that companies should be free to grow and expand without government interference. This laissez-faire approach to business led to many abuses, such as child labor and dangerous working conditions.
Today, social Darwinism is not a widely accepted theory. Most people believe that government plays an important role in ensuring that all citizens have basic rights and access to essential services. However, there are still some people who use social Darwinism to justify their own selfish or callous behavior.